The COVID-19 situation, which has been expected to calm down since massive vaccination, seems to go back into the fog due to the spread of variances. Anyway, many beloved hotels are being closed disappearing due to this long-running pandemic. Millennium Hilton, Sheraton Palace, Le Meridian and Crown have been sold, and are set to be redeveloped into residential and commercial complexes after demolition. In Myeongdong, which used to be the center of international tourists, many hotels seem to stay closed. 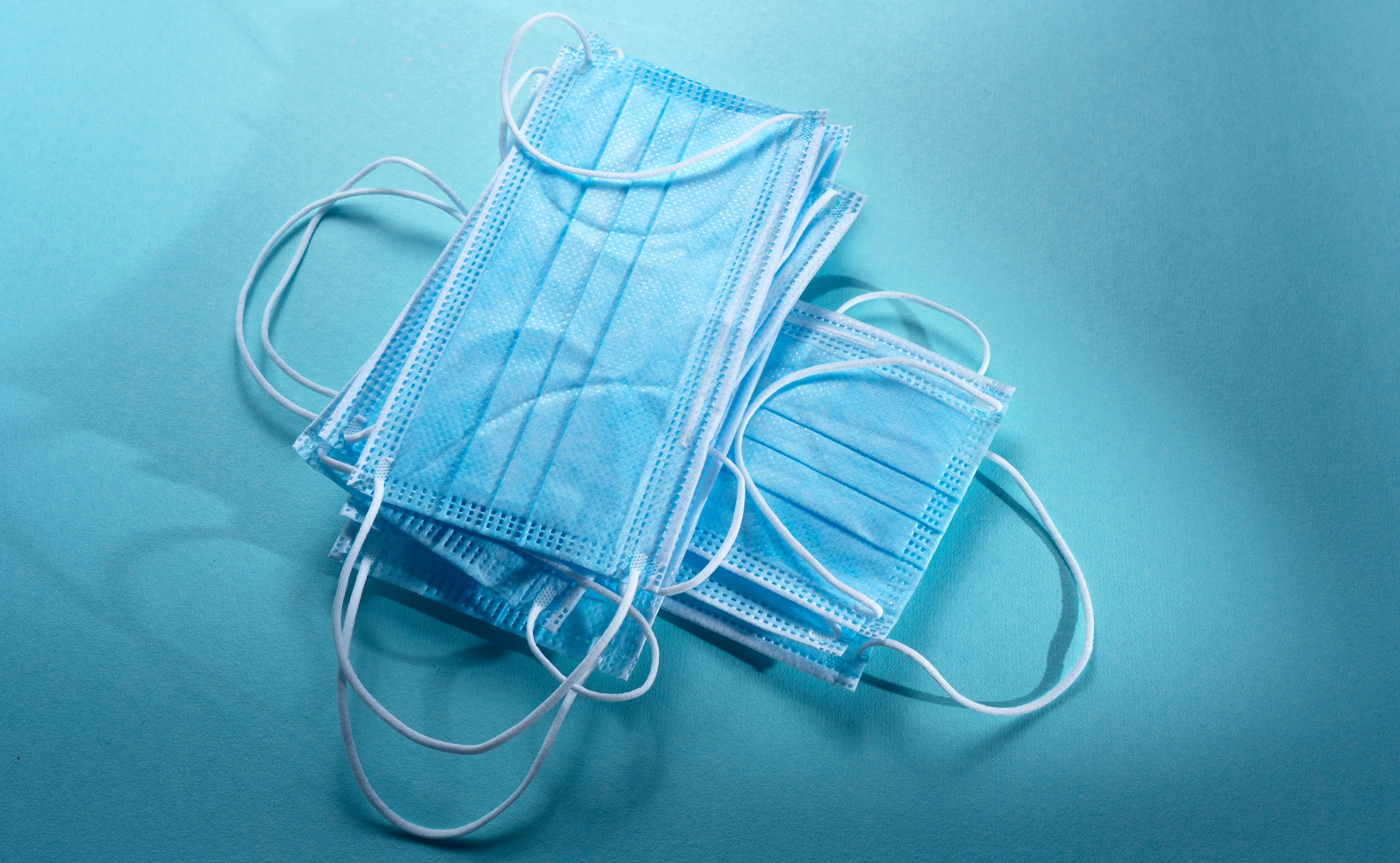 * Photo by Jievani Weerasinghe on Unsplash

In 2020, when COVID-19 froze the lodging industry around the world, the performance of global brand hotels was also disastrous.

In 2020 compared to 2019, the Systemwide* RevPAR saw a 59.0% decrease in Marriott, 56.5% in Hilton, 56.4% in IHG, 67.3% in Hyatt, and 67.7% in Accor. The consolidated results of these five listed global brand companies show that Systemwide RevPAR in 2020 decreased by 60.5% compared to 2019. Hyatt and Accor saw a larger decline than average, and the impact of Accor, which is relatively large in its portfolio, must have been greater than Hyatt. 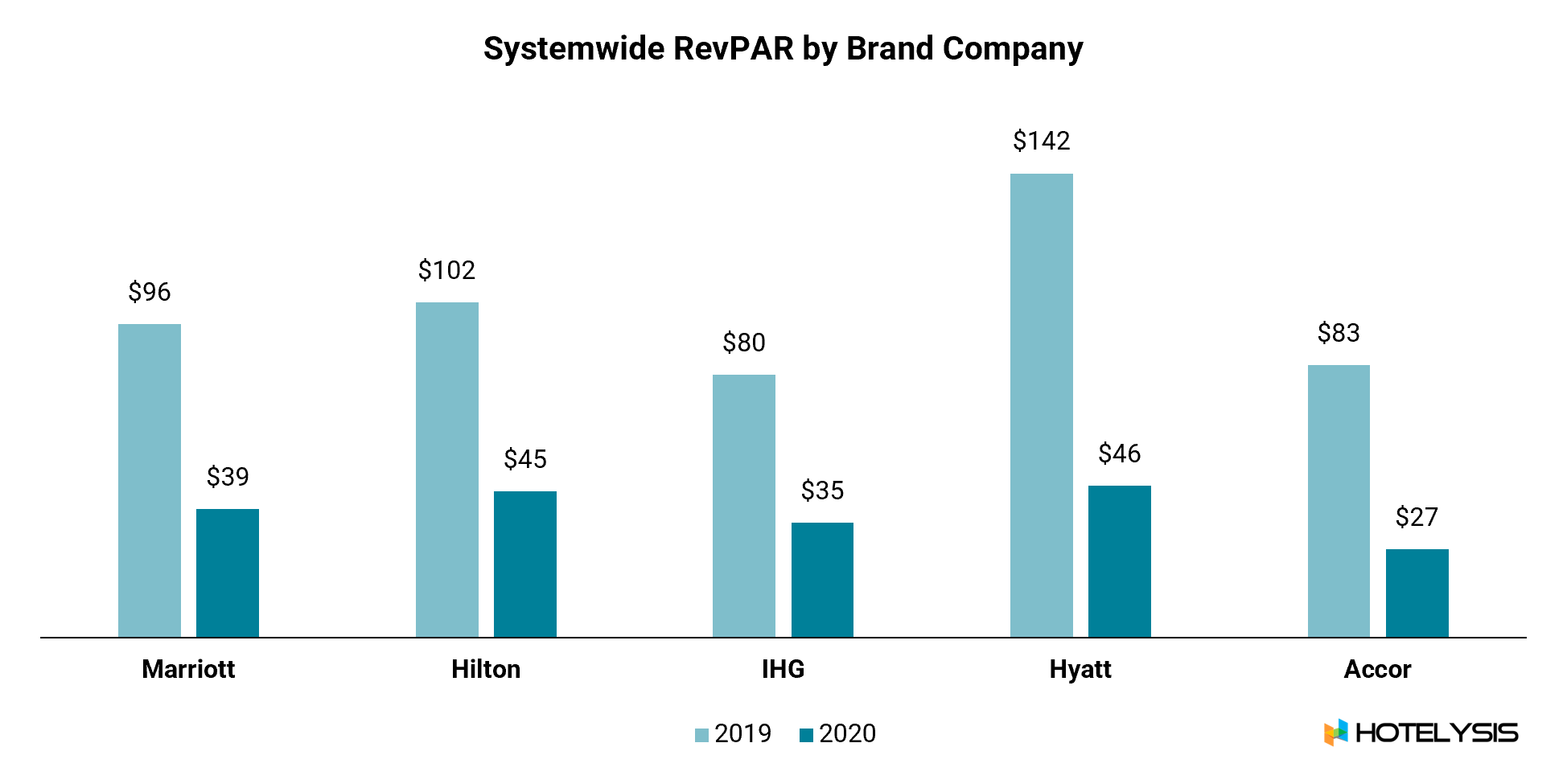 By region, RevPAR in the Non-Americas region showed a deeper decline of 63.6%, compared to a 58.6% decline in the Americas region. 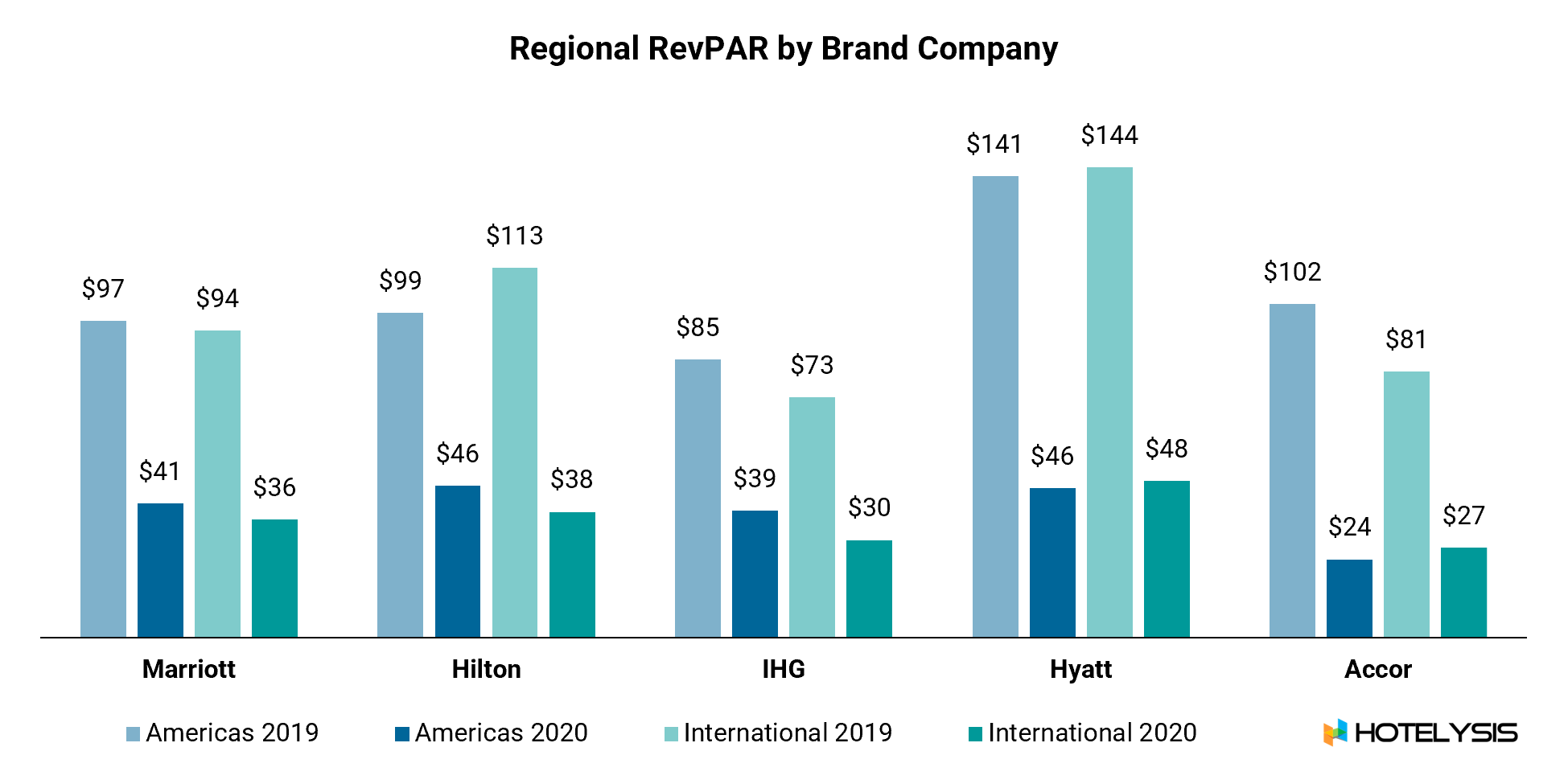 By brand, while the so-called life-style brands were weak, midscale and extended-stay brands were found to have been holding up relatively well.

In Marriott’s case, W showed the biggest drop of 76.2%, while Residence Inn held up relatively well at 45.0%. In Hilton, Hilton had the biggest drop of 66.9%, while Home2 had the best lead at 38.8%. In IHG, Kimpton saw the largest drop among all the brands in question at 79.9%, while Candlewood saw the smallest drop at 24.4%. In the case of Hyatt and Accor, the performance was quite disappointing across their brands, and Hyatt seemed to suffer the most as Grand Hyatt and Hyatt Centric decreased by more than 70% at the same time, coupled with a small portfolio and a high proportion of life-style brands. 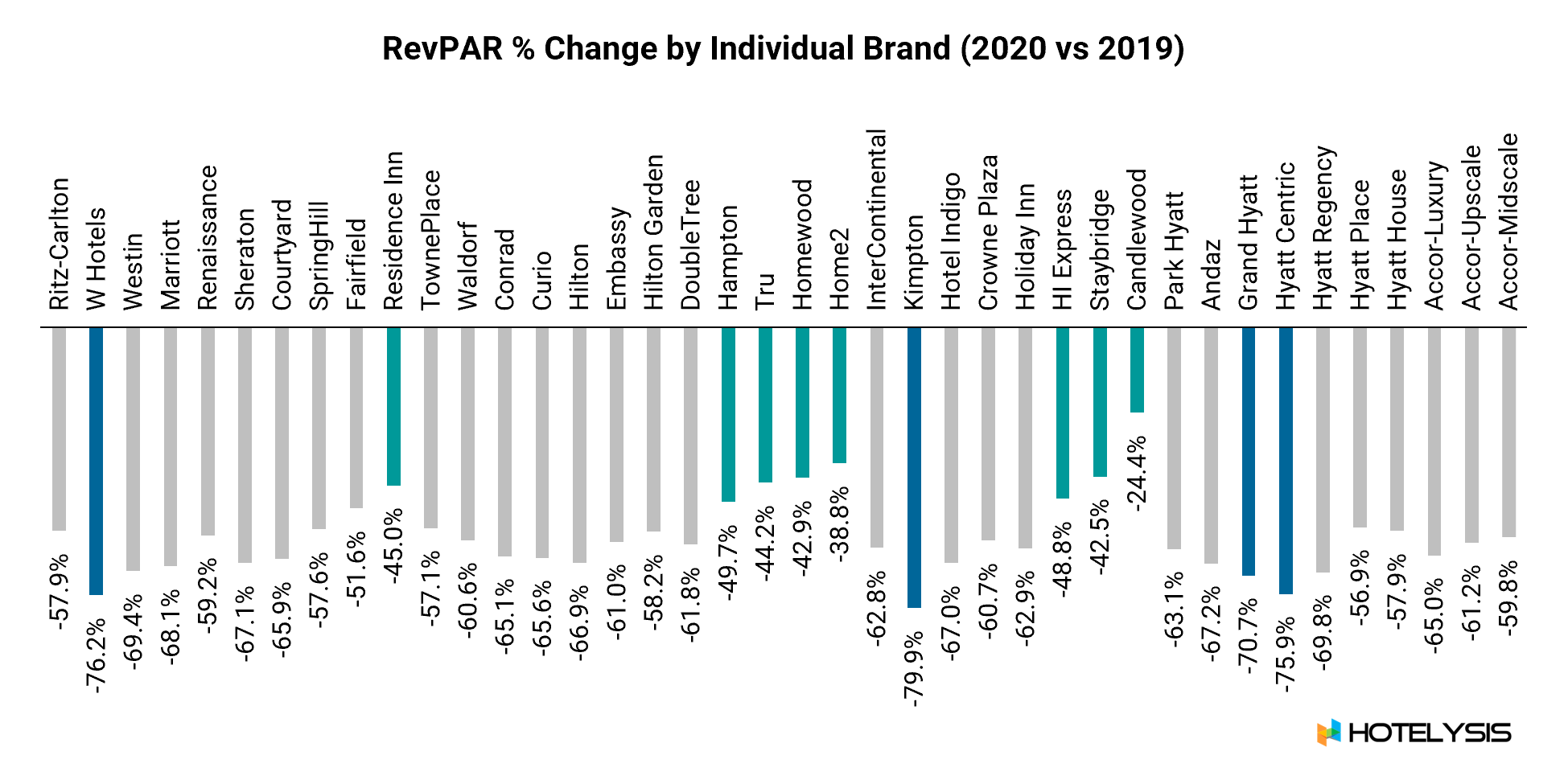 The current situation in the hotel industry in association with COVID-19 was reflected in the share prices of the global brand companies, to a certain degree.

Looking into the adjusted close price at the end of 2020 compared to the end of 2019, Marriott declined by 13.5% from &151 to $130 and IHG by 6.3% from $69 to $64, while Hilton was not so much impacted at 0.5% from $111 to $110. On the other hand, Hyatt and Accor seemed to be hit significantly by COVID-19, declined 17.7% from $90 to $74 and 21.5% from $47 to $37, respectively. The revenues of global hotel brands are tied to the revenues of their hotels, and therefore, their revenue streams are not free from hotel market conditions. However, most of them held up relatively well in share prices, compared to the circumstances in the hotel market. There seem to be several reasons. 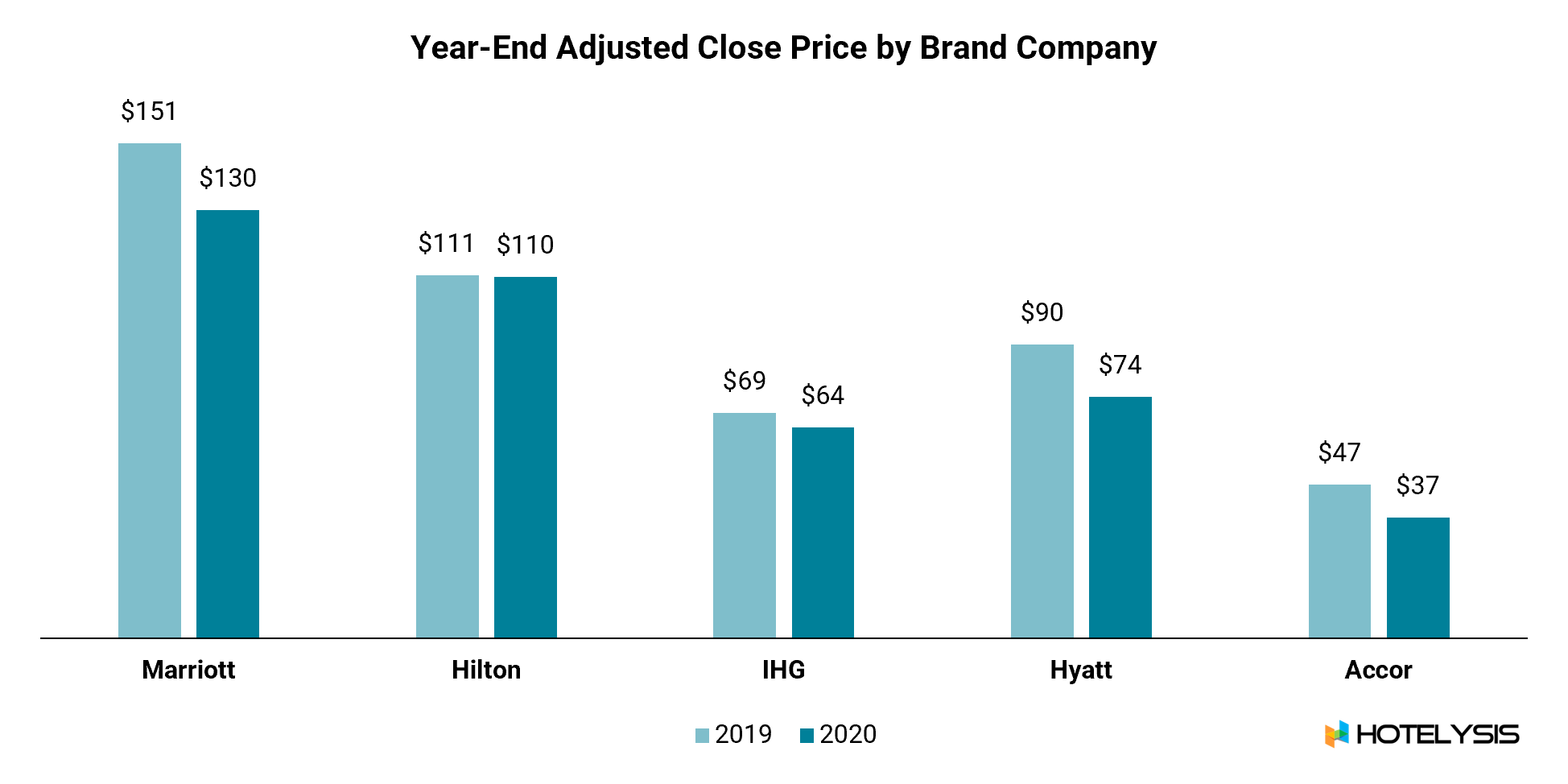 First, one of the main reasons is that the decline in revenues of global brand companies were relatively mild compared to the decline in hotel sales.

Second, another reason is that the decline in revenues of global brand companies was effectively blocked from flowing through to the bottom line.

Looking at the ratio of decrease in net income to the decrease in revenues in 2020, Marriott was 14.8%, Hilton was 31.2%, IHG was 34.0% and Hyatt was 49.7%. However, in the case of Accor, the decrease in net income exceeded the decrease in revenues at 115.9%, which still seems absorbable considering the size of its capital stack. Of course, none of the companies actually recorded ‘net income’, but ‘net loss’, in 2020, but most of them seemed to have prevented the impact of the revenue decline flow through to the profit through an effective cost management. The size of the portfolio seemed to help here, thanks to the economies of scale. The 2020 annual report showed that Marriott had 1.64 million rooms, Hilton had 101 million rooms, IHG had 890 thousand rooms, Hyatt had 230 thousand rooms, and Accor had 750 thousand rooms. 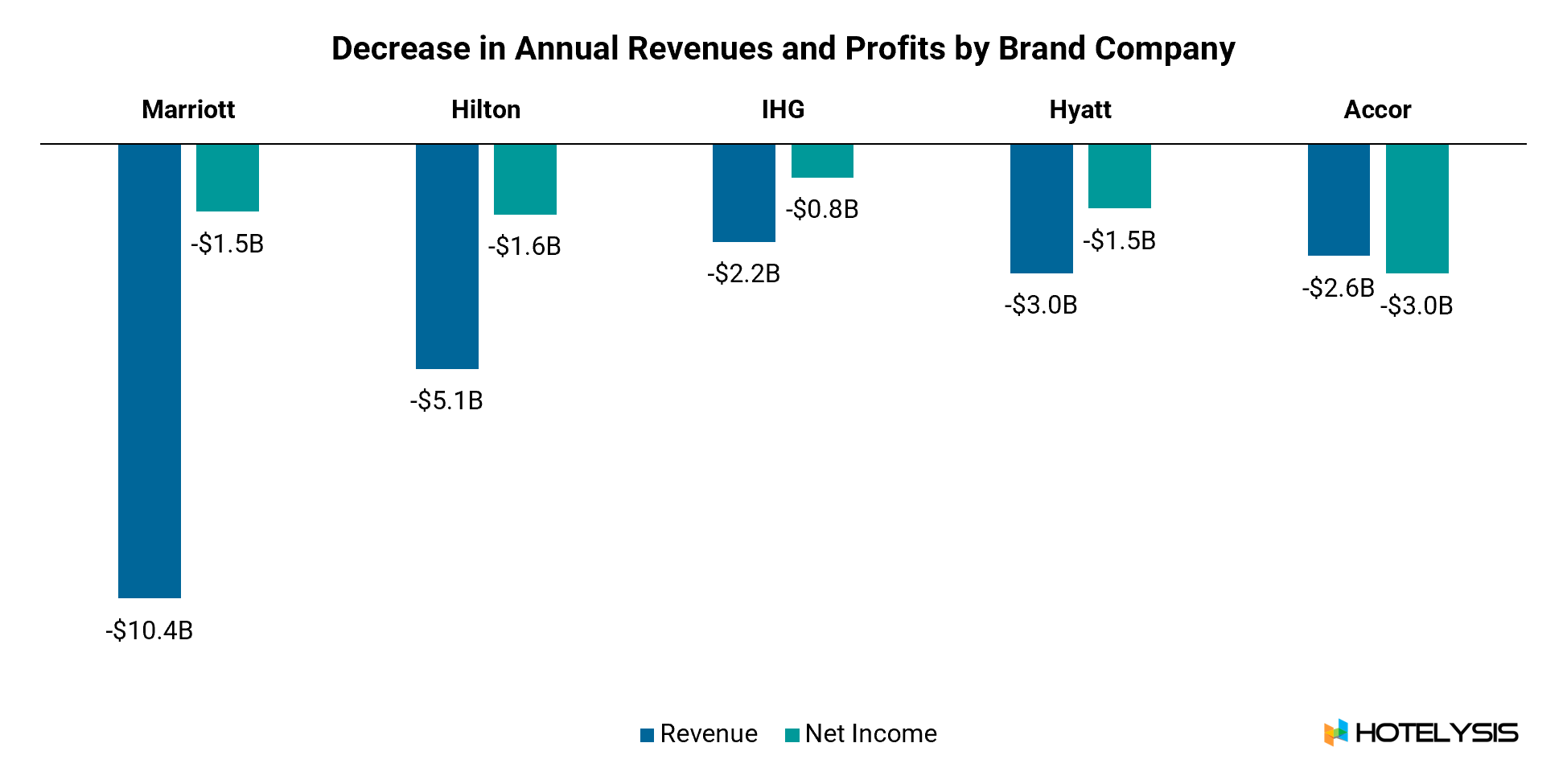 Third, the other reason that some portion of liquidity in the capital market, which were unable to find a place to park in the COVID-19 situation, were absorbed by global brand companies.

In the hotel industry, where cyclical fluctuations exist all the time, it seems like a common viewpoint to perceive this time as a trough. In addition, based upon past experiences, many people seem to think that there will be a rapid growth behind it. However, since the destructive power of COVID-19 can still knock down any hotel or company in the short term, the capital market seems to focus on these big players with already secured economies of scale. In particular, Hilton may have benefited from its bias towards the Americas region in its portfolio, with an expectation for global expansion after COVID-19. As mentioned earlier, the portion of the Americas region in Hilton’s portfolio at the end of 2020 was 77.1%, larger than its peers. 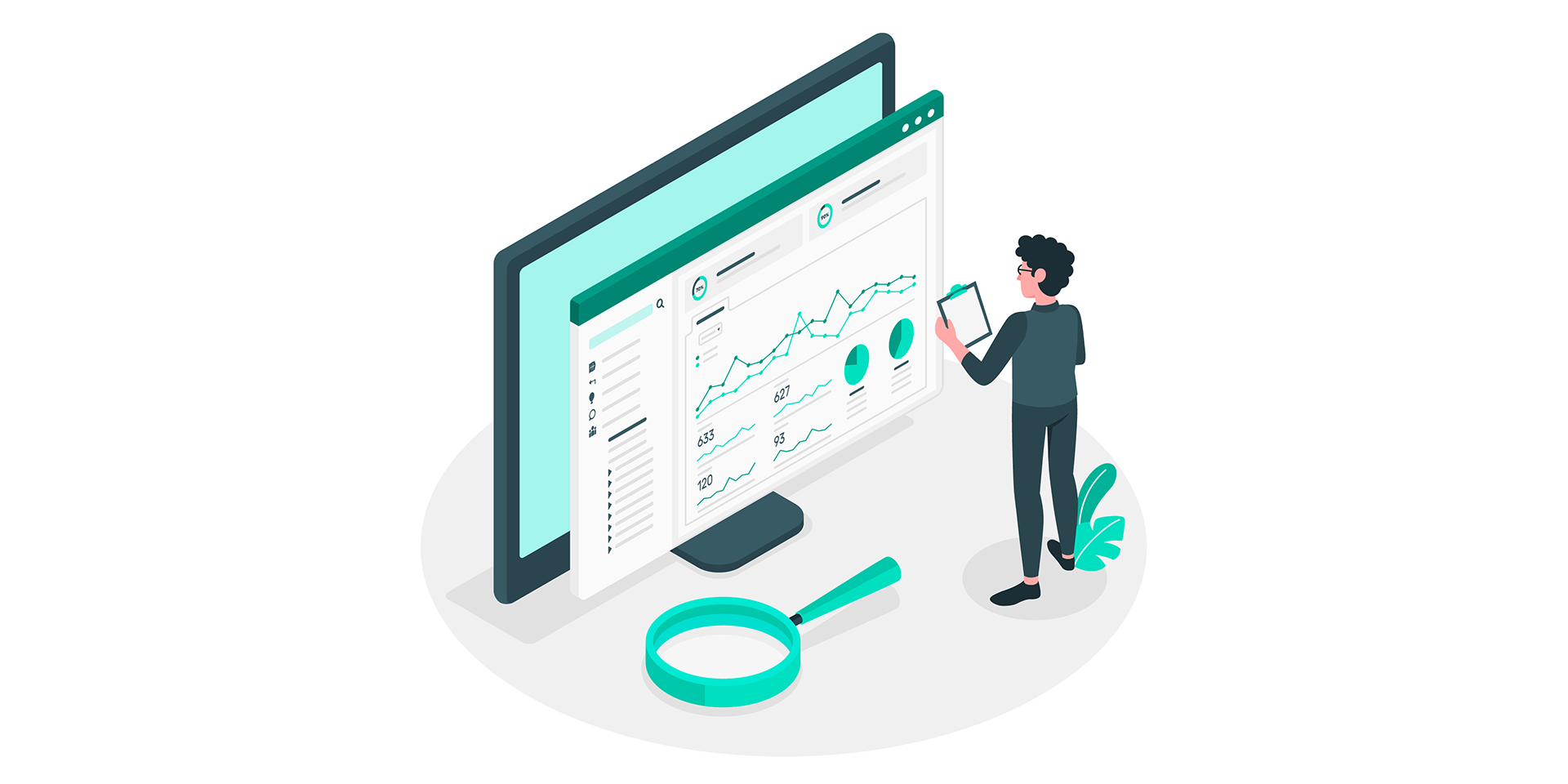 We don’t know yet when and how the COVID-19 situation will end, and we don’t even know what’s waiting for us at the end of that long tunnel. But as the bright sun rises back at the end of a dark night, there will surely come a day when we will have joke around this time. On the other hand, this dynamic ups-and-downs reaffirms the importance of data. Even in situations that we cannot quite follow and digest, there are cases we finally figure out how it worked as we go through the records later. Once we get there, they tell us a lot of stories. One thing clear in this uncertain times is that the more we listen to the story, the less frequent the recurrence of the same mistakes.

* Systemwide: Although the term is used a little differently by company, it generally refers to hotels that a brand company engages in operations through all types of of business models, including owned/leased, third-party management and franchise. On the other hand, “comparable” generally refers to hotels under owned/leased or third-party management models, excluding franchise.