Until COVID-19 stopped everything, it was easy to find articles about growing foreign visitors in Korea along with the Korean Wave. But now they are gone and we can only see some articles about lodging businesses in crisis due to COVID-19. Here come in a question though. How many lodging properties are there in Korea, how much have they earned in the boom, and how hard are they now that the market has disappeared?

As of 2019, it is estimated that approximately 30 thousand lodging properties supplied approximately 800 thousand rooms in Korea. But why is it not an exact number but an estimate? 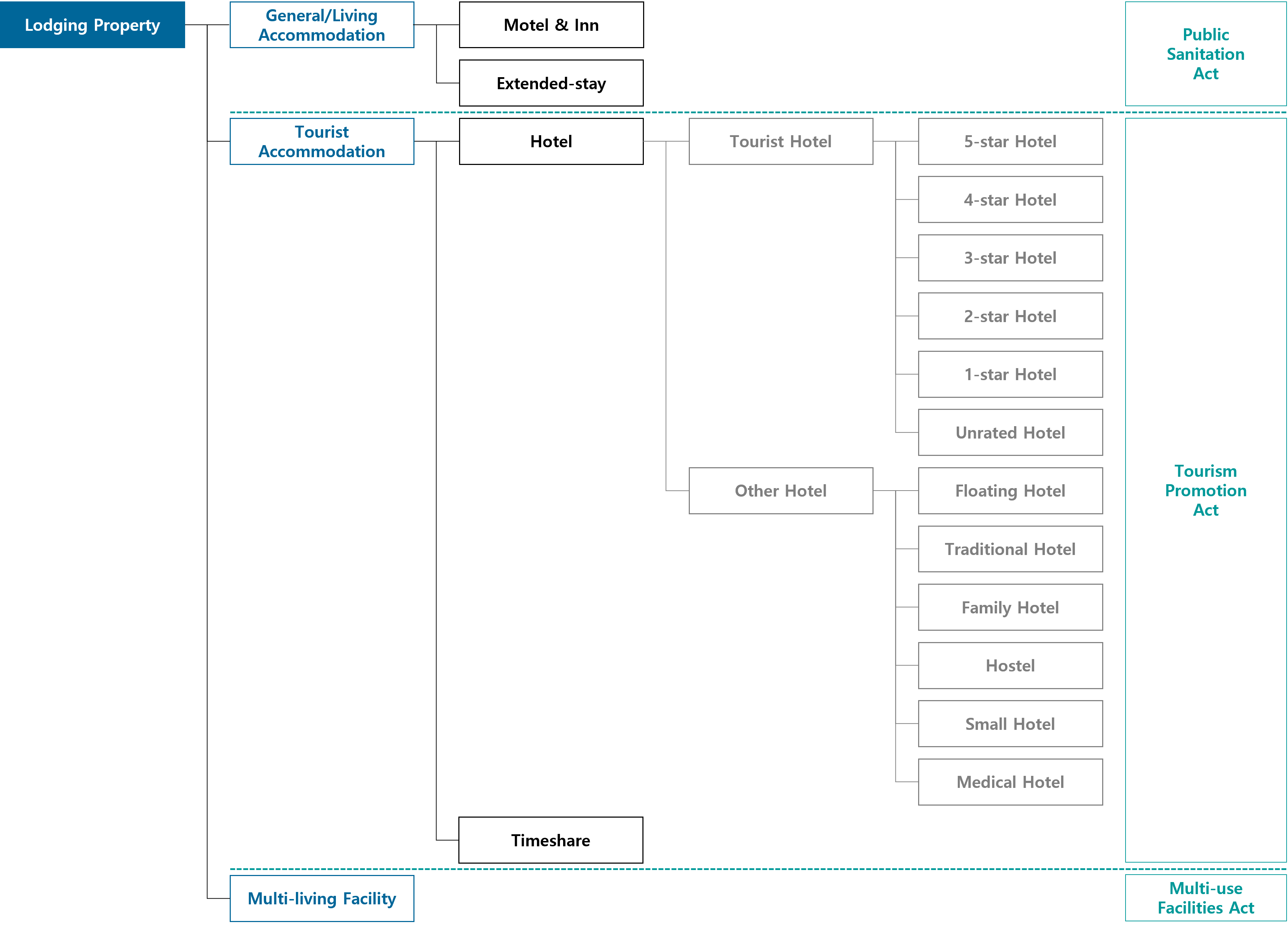 There are certain types of properties not clear where to belong. If you operate a guest house, pension, dormitory, youth training center, youth hostel, camping site, you may or may not be defined as a lodging business. Technically, they are not lodging properties as defined in the Building Code. A guest houses and pension are classified as a single-family house, a dormitory is classified as a multi-family house, and a youth training center, a youth hostel and a camping site are classified as a training facility. In particular, a youth hostel can be more confusing because they have a similar name to a hostel, one of the categories in the hotel.

Meanwhile, according to the Korea Hotel Association’s data on the operating statistics of hotel businesses, hotels in Korea sold 60% of the total 19 million rooms available in 2015, generating KRW 1.4 trillion in room revenues and KRW 1.3 trillion in other revenues. The statistics do not specify how many hotels participated in the survey, but you can infer from the separate source of data. According to the list of registered tourist accommodations, a total of 1,279 hotels supplied 117,626 rooms during this period. In other words, it is estimated that there were approximately 43 million rooms available, and the sample size in the operating statistics of hotel businesses represent 45% of the total supply. The operating statistics of hotel businesses are no longer available down to an individual property level any more due to the strengthening of privacy laws.

Combining the local government statistics and the list of registered tourist accommodations, it seems like 28,674 lodging properties supplied 780,677 rooms in 2019.

This includes youth training centers and youth hostels, some of guest houses and pensions, and excludes dormitories and camping sites. Of these, 69% of the accommodations represented by motels and inns. On the other hand, hotels, which provides a better visibility over the operating statistics, account for only 7% of all lodging properties. In other words, the visibility of the lodging market in Korea is limited to 7%. This is a problem because administrative policies or business decisions related to the lodging industry are made based on such limited visibility.

Now you no longer have to collect fragmented statistical data and be swamped in errors and inconsistency, to analyze the lodging market or create a business plan for a lodging property.

Hotelysis provides a comprehensive visibility over the lodging market in Korea with all the details about 23,273 lodging properties including general and living accommodations, tourist accommodations, and other accommodations as of 2019. This includes detailed data on facility information, demand, price, revenue, expense, working capital, financial position and asset value, which are provided for the period from 2005 to 2019 in the same format. Hotelysis’ AI algorithms have collected fragmented and scattered data from various sources, connected them and filled the blanks. Also, all the datasets went through multiple validation tests as compared to actuals, and are included in the database only when they passed the tests. (Database update 2021.08.12.)

Information barriers are increasing among operators, owners, financial institutions, and advisors, who are supporting the segmented value chain of lodging industry. And it’s now coming back as a boomerang, threatening the ecosystem of the lodging industry, blocking the interaction between lodging and capital markets, meaning the flow of market liquidities. Hotelysis will continue to work on breaking down the barriers to help the lodging industry regain stability of the value chain.